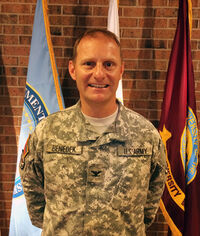 Dr. Benedek is Professor of Psychiatry and Neuroscience, and Associate Director/Senior Scientist at the Center for the Study of Traumatic Stress, Uniformed Services University. He is a past president of the Society of Uniformed Service Psychiatrists — the Military District Branch of the American Psychiatric Association, and Immediate Past Branch Representative to the APA Assembly. He is a Distinguished Fellow of the American Psychiatric Association. In addition to his operational experience in Bosnia and Croatia Dr. Benedek has deployed to Cuba, Iraq, and Kuwait in conjunction with the Global War on Terrorism. Dr. Benedek served as Consultant to the U.S. Army Surgeon General for Forensic Psychiatry from 2004–2008.

Dr. Benedek received his B.A. from the University of Virginia in 1986 and his M.D. from the Uniformed Services University School of Medicine in 1991. After Internship and Residency in Psychiatry at Walter Reed Army Medical Center, he was assigned as Division Psychiatrist, First Armor Division, Germany. From there, he deployed to the former Yugoslavia and delivered mental health support to U.S. and NATO Troops for Operation Joint Endeavor (1996). He returned to Walter Reed to complete forensic psychiatry fellowship training in 1998 and then served as the Assistant Chief of Inpatient Psychiatry, Walter Reed Army Medical Center. In 1999 he became Chief, Forensic Psychiatry Service, and Director, National Capital Consortium Military Forensic Psychiatry Fellowship Program at Walter Reed, and he remained in those positions until joining the USUHS/CSTS faculty in 2004. Dr. Benedek’s awards include the Meritorious Service (3OLC) and Army Commendation (3OLC) Medals for his work at Walter Reed and in Bosnia, the LTG Claire Chennault Award for Outstanding Military Psychiatry Faculty Member, and the American Psychiatric Association’s Nancy C.A. Roeske Award for Excellence in Medical Student Education. In 2002 he received the U.S. Army Surgeon General’s “A” Proficiency Designator, and subsequently received the Order of Military Medical Merit

Dr. Benedek has authored or co-authored over 100 scientific publications, and has presented on numerous aspects of military, disaster, and forensic psychiatry at regional, national, and international professional conferences. He has served on the American Psychiatric Association’s Committee on Confidentiality, was a consultant to the Association’s Practice Guideline for the treatment of Acute Stress Disorder and Posttraumatic Stress Disorder work-group in the development of its 2004 practice guideline, and was also lead author on the 2009 guideline update. Dr. Benedek currently leads several ongoing clinical and epidemiological studies. He directs the National Capital Area Integrated Clinical Study Site, one of ten clinical sites in the INTRuST Clinical Consortium for Psychological Health and Traumatic Brain Injury funded by the Congressionally Directed Medical Research Program (CDMRP). He is the USUHS site lead investigator for the Soldier Health Outcomes Study-B (SHOS-B) arm of the Army Study to Assess Risk and Resilience in Servicemembers (ARMY STARRS).

Visit ResearchGate for a list of Dr. Benedek’s publications.